Start of the crowdfunding campaign 2020

2019 – 2019 Aldradach
The hard-working staff members of the Scriptorium collect information during the Festival of the Dragons. Their goal? They want to help Bartholomäus to write an extension of the Aldradach Almanac which focuses on the camps instead of the town. The working title is Lagerlexikon (Camp Reference), but this is soon changed to Camp Compendium. The German name is found by Abdul, the Lazy, one of the merchants of the Karawanserey: Lager-Lümmel.

2019 – 2019 Aldradach
The new cover image by Tora Melkírsdottír receives universal praise and people also love that the Almanac now contains almost all the traders and food stands. The staff of the Scriptorium brings news of the Almanac in even the most remote camps. The English version of the Almanac is sold out within two hours - a new record!

Bartholomäus Federkiel is forced to admit that his work steers him away from his dream to found a theatre. But in exchange he finds a new dream: to make the premises of the City Theatre THE place to be for future authors and lovers of books and calligraphy.

The name is changed to City Theatre and Scriptorium of Aldradach - but right at the start of the Festival of Dragons in the year 13 a.f.A. there's a revolt among his employees of the theatre - in his favour. All of them want to support his new dream. The theatre is scrapped and from that day on all the former theatre staff members are working under the new name Aldradacher Skriptorium (Scriptorium of Aldradach) to sell beautiful and interesting literature and writing.

The ‘Make it blue!’ contest

2018 – 2018 Aldradach
Blue wins the Dominion over the Dragonlands in the year 13 a.f.A. - time to address one of the things most people complained about when it came to the Aldradach Almanac 12 a.f.A. - the cover design. Bartholomäus hosts a contest to find the best drawings. The winner is Tora Melkírsdottír of the Red Camp. A fruitful cooperation begins which is still on-going.

2018 – 2018 Aldradach
The first book published by Bartholomäus Federkiel and the first book that got financed using a crowd-funding campaign. This book had already the known format and was significantly more complete. This edition covered the colony and included many stories about the town.

2017 – 2017 Aldradach
Ludovic leaves the town of Aldradach which had been his home for seven years. On his way he meets Bartholomäus Federkiel, who wants to found a theatre. Ludovic convinces Bartholomäus to move to Aldradach and to look after the Almanac. He does that, but it took another year before a new edition of the Almanac got published.

2015 – 2015 Aldradach
Ludovic, the Player, one of the Keepers of the AWZA, starts a project to collect information about the town in a booklet. He calls that booklet Aldradach Almanac - back then it only had 75 pages. Even if it didn't look like much - there were no pictures and the font was criticised as hard to read - many already saw the potential in this work. One of the first readers was none other than the Golden Avatar. 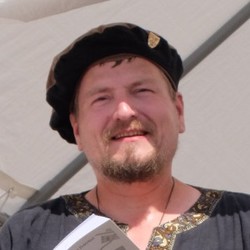 Bartholomäus Federkiel, played by Jens Grabarske, is the former director of the City Theatre of Aldradach. After a night full of drinks he took on the job of maintaining the Aldradach-Almanach from the original author, Ludovic the Player. In the beginning he just wanted to do this project on the side to be able to get to know the town of Aldradach better. But step by step Bartholomäus discovered his love for the written word. With the Scriptorium of Aldradach he not only strives to continue looking after the Aldradach Almanac, he also works on other projects and helps aspiring authors to find readers for their books.